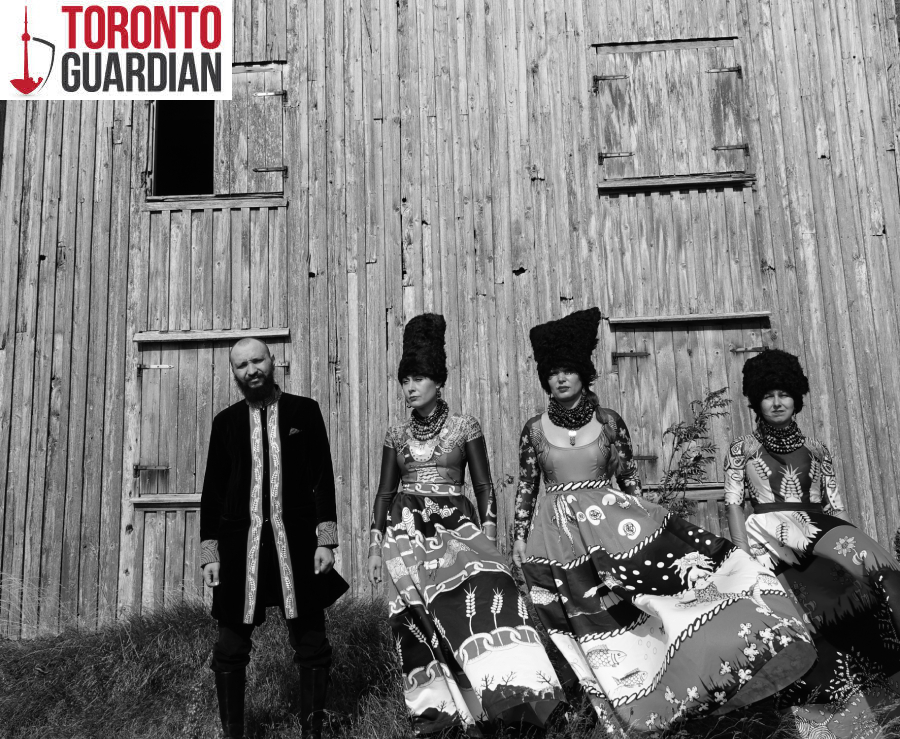 The world music quartet DakhaBrakha made their Royal Conservatory debut declaring their wish for a “free Ukraine” and a plea to “Stop Putin.” Not surprising as the members are from Kyiv, Ukraine. Their concert was the 933rd in Koerner Hall – one of many events celebrating the Toronto music venue’s 10th anniversary season.

The 90 minute show was a mash-up of mainly reworked folk songs united with contemporary styles like punk, rap, hip-hop, soul, jazz and experimental noise music. DakhaBrakha has a history of using rural folk songs from across the Ukraine, reworking them so they appeal more broadly to an international audience. Despite the songs being in Ukrainian, the language barrier mattered little, as the performance was rich with many dramatic peaks and valleys; the show was as much a theatre performance, as a musical one.

At all times during the performance there were drums; a loud mix of darbuka, bass drums, tabla, djembe and bugay. A myriad of other instruments appeared throughout the performance, from the garmoshka (Russian button accordion), tambourine and harmonica to flute, piano and cello. Each member of DakhaBrakha sings and plays multiple instruments – a supremely talented troupe!

Not everything encapsulated folklore; one of the songs in DakhaBrakha’s repertoire was inspired by Shakespeare’s Sonnet 77. Joking with the audience, Halanevych said thank you to Shakespeare for the free lyrics before proceeding to sing. Another tune consisted of playful vocalizations that mimicked birdcalls. The whole performance was immensely creative and diverse in music styles.

The troupe’s singing style runs deep along the roots of Balkan music yet also makes you think of experimental vocalists such as Björk. DakhaBrakha singing is founded on traditional Ukrainian chordal harmony, which is what makes their vocals stand out to listeners not familiar with the complex harmonics – the singing is exotic and doesn’t fit neatly into the rules of traditional Western European harmony.

DakhaBrakha’s ensemble harmonies and near constant drumming had a hypnotic effect. Near the end of the concert a number of people in the audience had jumped out of their seats, dancing without restraint in Koerner Hall. This is a band you should see live; DakhaBrakha is an unexpected new music experience.

At the end of the show they unfurled the Ukraine flag to a standing ovation.