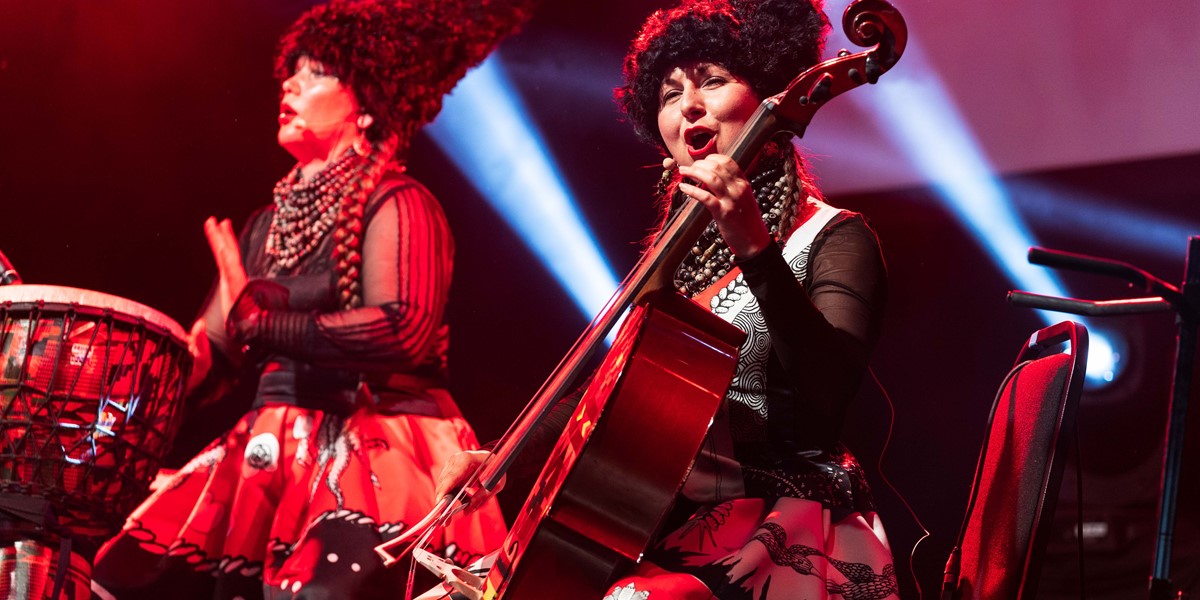 By Simon Broughton. Music from Indonesia, South Sudan, Mali, Ukraine and Occitania lights up the festival

If you know the music of an area, it helps you understand the people. And after the horrors you’ve seen music keeps you sane.” This was the Guardian’s world music writer, BBC correspondent and Songlines writer Robin Denselow talking about ‘a life reporting on war and music.’ With extraordinary tales from Angola, Rhodesia, Rwanda and more, Denselow gave an entertaining but insightful view of how music and politics are intertwined on the international stage. It’s what Songlines is about and also a reminder that WOMAD isn’t just about music, but also the spoken word, arts, crafts and much more.

WOMAD’s Saturday concerts started with Indonesian gamelan, something that we’ve been covering in Songlines recently with the David Attenborough gamelan remix competition. But gamelan is a rarity at WOMAD, largely because it involves transporting a lot of musicians and many bulky instruments. The Kyai Fatahillah Ensemble are from Bandung in Sunda, western Java, where the style is punchy, dynamic and rhythmic. The Indonesian players were joined by several British gamelan players. With all the musicians sitting down, it was hard to see what was going on, although the leader Iwan Gunwan on drums was a driving force. Three dancers brought elegance and colour and the set finished with a dramatic masked dance with a red pointy-nosed king. It was an invigorating set and a welcome change to the bass-heavy festival fusion that inevitably predominates.

Emmanuel Jal was a child soldier in Sudan and his performance with his sister Nyaruach was a powerful one distilled from his experiences. ‘Voice in my brain of friends who were slain,’ he raps. He was rescued by aid worker Emma McCune and he performs a moving song in tribute to her. But he was also asking us all to make peace signs and raise our hands in a power salute. Frankly I don’t like being told what to do, and I think the music should be doing that, not hectoring from the stage.

Malian singer Salif Keita had one of the headline slots and he, along with Youssou N’Dour, is one of the great voices that kicked off the world music boom in the mid-1980s. Reaching 70 next month, he’s said that his recent album, Un Autre Blanc, will be his last and the rumours are he will stop touring. To be honest, his recent albums have been disappointing, but on stage his voice is still one to be reckoned with. It soars with a craggy power, backed by a fine band with kora and a superb djembe player. He is still one of the great voices of Africa.

But the new(ish) kids on the block are DakhaBrakha who attracted a huge crowd to the Siam stage and had the longest queue for merchandise after the show that anyone could ever remember. DakhaBrakha are a quartet ­– Olena, Iryna, Nina and Marko – from Ukraine. They’ve branded themselves with their incredible polyphonic singing and stovepipe hats. The short opening song in their set started with super-clashing vocals and then two of the ladies hammering on a thunderous drum. The magic is the vocal power and the theatricality.

The evening was rounded off by more energetic vocals from French a cappella group San Salvador. Rousing, sonorous and deep they sent people off into the night glowing inside.