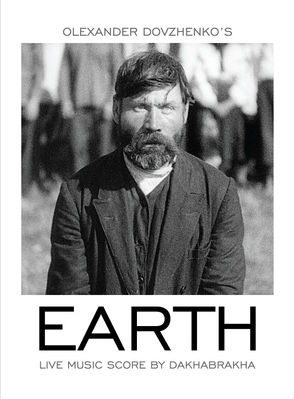 In addition to their own performances, DakhaBrakha also performs their original live soundtrack along with screening of the classic 1930 film, “Earth”, by Aleksandr Dovzhenko, considered to be one of the most important films of the Soviet era. Dovzhenko is a master of composition, and the film—with its intense close-ups and the impressive expanses of the landscape—is a passionate tribute to the countryside, to nature, and to the people that work on it.

“Earth” was banned 9 days after it’s original release, and was glorified in Ukraine only after Dovzhenko’s death in 1956. Full of lyrical pantheism and utopian exaltation, it demonstrated the ambiguity of Ukrainian geopolitical choice in the 1920s. In 1958, a film critics’ forum in Brussels named “Earth” one of the 12 best films in the history of world cinema.

The group has this to say about the creation of their soundtrack for “Earth”:

“Making music for Alexander Dovzhenko’s “Earth” was a great honor for us and a difficult creative challenge. Frame by frame, this Ukrainian masterpiece of world cinema impressed us every time we worked on it. No matter how we tried to work on the film as a self-contained artistic endeavor, avoiding ideological evaluation, we could not. Of course, we voiced the film in the human terms of the 21st Century, even while being aware that after 1930, when the work was completed on “Earth”, came the years of the Communist famine of 1932-1933, the years of repression, and we know about the difficult fate of the Dovzhenko socialist empire. Together, we tried to convey the authenticity, and also the naivety, of those feelings and messages brought to us from that time and that era, to us today and our Earth.”