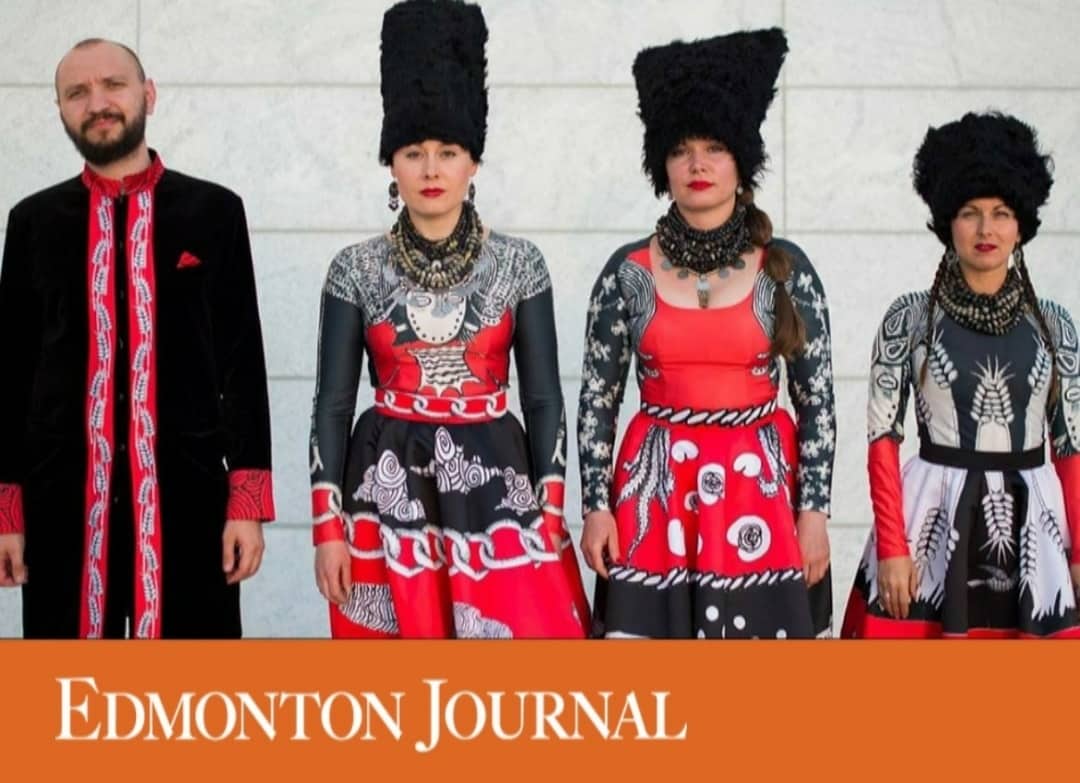 "Considering that Ukraine has a big neighbour which thinks that even the existence of our country is a historical misunderstanding... every one of our concerts abroad can be regarded as a political act in itself." - Marko Halanevych, DakhaBrakha

"Considering that Ukraine has a big neighbour which thinks that even the existence of our country is a historical misunderstanding... every one of our concerts abroad can be regarded as a political act in itself." - Marko Halanevych, DakhaBrakha

The name DakhaBrakha translates as “give and take,” marking an international exchange with daring and panache.

Since their beginnings at Kyiv, Ukraine’s Dakh Theatre some 15 years ago, the group DakhaBrakha has focused on reinventing ages-old folk songs for a new era, generally avoiding explicit political or social commentary. Today, after 300-plus concerts in more than 40 nations they are Ukraine’s most popular musical export, a hard-to-explain experiment in “ethno-chaos” (their words) sparking vibrant, singular soundscapes and a theatrical performance style to remind the world of their nation’s rich culture.

You might remember this hip quartet from several previous appearances here, including the 2014 and 2018 folk festivals, distinguished by their amazing atmospheric songs, eclectic instrumentation and a unique look with those crazy, huge hats. The trio of college students Iryna Kovalenko, Olena Tsybulska and Nina Garenetska and their collaborator Marko Halanevych couldn’t have guessed what they were getting into when Dakh’s director Vladyslav Troitsky lured them into his avant-garde vision of folkloric music theatre in 2004.

After tracking down Halanevych in the middle of their latest North American tour the musician-actor expressed his satisfaction with the way DakhaBrakha continues to make new fans.

“Ukrainian folklore is still the basis of our inspiration,” he allows. “For us, it is very important and relevant and we are happy that the world is discovering Ukraine through our music. Considering that Ukraine has a big neighbour which thinks that even the existence of our country is a historical misunderstanding, a Freemasons project of the Polish or the Austro-Hungarian Empire, then every one of our concerts abroad can be regarded as a political act in itself. But we’ve never written political lyrics and hardly ever write lyrics to our songs. Most of them are folk songs written by anonymous authors.”

While Russia’s invasion of Ukraine’s Crimea region hasn’t affected the members of DakhaBrakha directly, in Kyiv it’s impossible for them to forget the lives lost and the ongoing human struggle in other parts of their country.

“For about 300 years the Russian empire has been trying to destroy Ukrainian culture, language, customs and history. In view of all this, we continue to fight for our own independence, so every concert is an attempt to talk about the freedom we deserve.”

At the start they were something of an avant-garde offshoot of Dakh Theatre, a band integrated into the venue’s productions of Shakespeare and other classic fare, but the demands of touring changed all that about five years ago.

“We started touring more so no time for theatre remains. But the Dakh Theatre remains our rehearsal base, and we continue to make music together with our ideological mentor and director Vlad Troitsky.”

Even at home in Kyiv the band’s reputation has moved beyond its early association with the fringe of Ukraine’s arts scene.

“We’ve never been a mainstream project, but we are not radically incomprehensible either. We found our niche and our listeners in Ukraine as we have throughout the world. We are the longest touring band out of Ukraine and we don’t hide it from anyone.”

It’s impossible to tour and not be altered by outside influences. The band has even picked up a few instruments in their travels, but Halanevych feels that evolution has happened less by deliberation and more by osmosis.

“We are not afraid to borrow. We’re open to it, but less aware of it than you might think. We usually hear about it from musicologists.”

You can get an idea from the credits of their 2009 album Na Mezhi, which features Marko Halanevych on darbuka, tabla drums, didgeridoo, accordion and trombone, Iryna Kovalenko on djembe and bass drum, accordion and folk percussion, Olena Tsybulska on more percussion and accordion, and Nina Garenetska on cello and drums. Still, the most arresting part of the band’s sound has to be the stark, ethereal vocal harmonies of the three women singers, reminiscent of the famous Bulgarian women’s choirs.

DakhaBrakha has released five albums since their 2007 recording debut Yahudky. While they highlight folkloric songs their last 2016 album The Road included tunes from Ukraine’s varied regions and regions occupied by Russia, including songs of the Chumak caravans.

“Clearly, this was a separate social group with their customs, lifestyle, and folk songs that have been preserved, surprisingly, up to our time. The whole life of the Chumak was the road, actually, like ours is now.”

The album also pays a nod to ongoing struggles in its dedication, “to those who gave their lives for our freedom, who continue to stand over its guard, and who go the challenging way of a free person without losing their hope.”

An intriguing recent single called Plyve choven is the group’s adaptation of a folk song by Ukrainian composer Nicholas Leontovich, recorded for the soundtrack to a new film by director Roman Bondarchuk called Volcano. The release of their next full length album is expected before year’s end and the band expects to perform tunes from that project here.

As Halanevych explains, addressing the war is a difficult thing for the group.

“It is a great disaster and a tragedy for us. During the whole war — disguised by Russia as a Ukrainian internal political conflict — 14,000 people were killed and a large number of Ukrainians and Crimean Tatars remain in Russian prisons. So this is an untreated wound. All these things are difficult to understand and to live with and it’s really hard for us to artfully reflect on this pain.”